演講摘要：
This talk describes an ongoing book project based upon long-term ethnographic research with rural agricultural communities in southwest China’s Sino-Tibetan borderlands; a region officially designated and named “Shangri-La” by the Chinese government for tourism promotion.  Over the past 15-20 years, vast areas of land have been transformed into monocrop vineyards for government promoted “Shangri-La Wine,” among other brands also marketed using Tibetan culture and the pristine environment of this Himalayan region.  Much of this marketing is also based upon a local history of French and Swiss Catholic missionaries who first introduced grapes and wine making during the late 19th century.  Despite these marketing developments of natural wine products with a historical nature, the emergence of this industry has led to rapid development in the use of chemical fertilizers and pesticides introduced by wine company representatives and government extension workers, the effects of which are not always lost on local communities.  In this work I draw upon the French concept of terroir or “taste of place,” to compare and contrast two divergent approaches to landscape transformation and identity surrounding viticulture in Shangri-La: Local household industries built off of individual village narratives and organic production methods, versus large scale corporate projects that have moved entire communities off of subsistence agriculture with heavy agrochemical intensification that forces communities to rely on grapes as their sole crop with an uncertain future.  This work engages with ongoing discussions regarding capitalist agrarian change and transformations in China, and is particularly relevant in capturing the nascent reconfiguration of landscapes as complex engagements among the state, corporate capital, and local (ethnic and religious) communities.  I also highlight the ways in which various historical contingencies and ethnic heterogeneity found in the region as a contact zone between multiple peoples and worlds have contributed to new notions of Tibetan identity within the context of globalization and transnational networking. 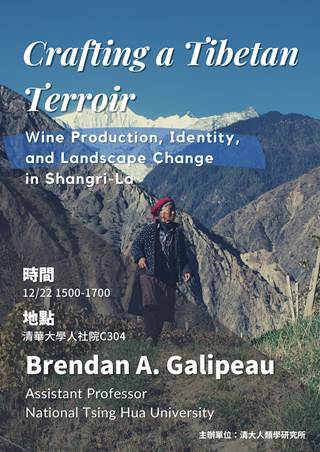